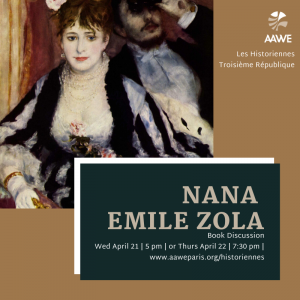 Emile Zola’s novel Nana was an instant success, selling out all 55,000 copies on its first day in print in 1880. It was highly praised. In addition, its outraged critics boosted its popularity. It depicts Nana’s rise from prostitute to courtisane during the last three years of the Second Empire, leaving all men who pursued her destroyed in her wake. The famous cocotte Valtesse de la Bigne apparently served as her model. The book was the ninth installment in Zola’s 20-volume series, “Les Rougon-Macquart.” The ultimate “series” of its time! Nana as a character first appeared in L’Assommoir in 1877. The novel went on to inspire French, American, Italian, Swedish, and Mexican film versions, plus a British and a French-Belgian-Swiss TV mini-series.

Join us as we enter the world of 19th century Paris’ lorettes and cocottes through the lens of Zola’s social determinism—the idea that we are determined by our heredity, our milieu, and our time.

Limited to 12 participants in each session. Cost: free