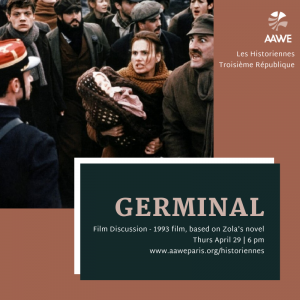 As part of the 2nd Les Historiennes Series.

Zola’s Germinal – Discussion of the 1993 Film

Viewed as Zola’s masterpiece, published in 1885, Germinal has inspired five feature films and two TV productions. It tells the harsh and realistic story of miners involved in a coal mine strike in Northern France in the 1860s. It is the 13th novel in Zola’s Rougon-Macquard series. The novel’s central character, Etienne Lantier, like Nana, also previously appeared in the earlier novel, L’Assommoir. Germinal was the fruit of a great deal of research by Zola. Claude Berri’s 1993 film was, at the time, the most expensive feature film ever made in France. It starred Gerard Depardieu (as Etienne), Miou Miou, and Renaud.

One can access the film in the US via GooglePlay, Amazon Prime, and iTunes (all with English subtitles), and in France, via Arte (French subtitles) or Canadian iTunes (English subtitles). Join us in discussing this award-winning film adapted from one of France’s most important novels. 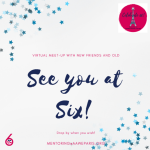 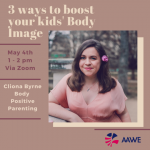 Body Positivity Workshop with Cliona Byrne: 3 ways to boost your – and your kids’ – body image
Scroll to top